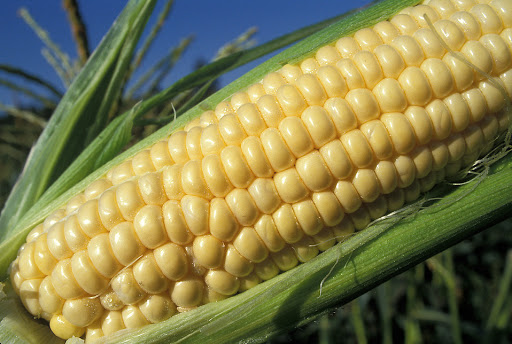 A bushel of corn is not measured in ears of corn but in pounds, 56 pounds to be exact. Although this may seem like simple math it gets much more in depth than that. If you have 4 acres of corn planted that would be approximately 400 bushels of corn! But even if you have only one bushel of corn it can do quite a lot. It can create 1.5lbs of corn oil or even up to 400 cans of soda!

Let’s start off with getting back to the basics. What exactly is corn? Many people wonder if it is a fruit, a vegetable, or a grain. With many people believing a tomato is a fruit we can only be so cautious about labeling other staples within our diets.

Nevertheless corn is great to have in your diet, as long as it isn’t always covered in a pound of butter and tons of salt.

Getting even more in depth is the fact that there’s three different kinds of corn; Sweet Corn, Dent Corn, and Flint Corn. Sweet Corn we buy and eat from the grocery store, it is most appealing to the human taste buds. Dent Corn is what is farmed in order to feed livestock, this is generally what they eat throughout the entire year. Lastly, Flint Corn is the popcorn or decorative kind.

Where Did Corn Come From?

Well corn actually came from both North and South America. From here it was domesticated and then spread throughout the world as American’s traveled around. Now it is the most grown crop in the world! Somewhere along the line corn went from nothing to the most important crop in the world.

When and Where to Plant Corn

When looking at starting to grow a new plant, whether it be a crop or a flower, you must start with figuring out when to plant the plant and where to plant it. Corn likes the warmth, it is not a cold season crop. Corn is also an annual which means that it will not regrow the next year, although most people already knew that.

To answer the question of when to plant corn you have to look at your individual area. If you are in a warm area you may be able to plant corn for longer each year or maybe even all year. In order for the corn to succeed when planted the soil must be at least 60 degrees Fahrenheit. Almanac’s generally state that this is about 2 weeks after the last frost of the year.

As for where to plant corn that is pretty standard across all climates. The soil needs to be dark, rich in nutrients, not colder than 60 degrees Fahrenheit, and moist. This is generally the best soil for any type of crop or plant you would like to plant. Also keeping the corn in a sunny area that is protected from wind creates perfect conditions for it to thrive.

How to Grow Corn on Your Own

Growing corn could seem fairly straight forward after googling it but in reality it takes a lot of time and effort. That is one reason we should be so thankful that so many farmers grow it every year.

Corn cannot compete well with weeds, it is not a super strong plant and needs help along the way. Once the roots are sturdy in place, after about a month, the corn will have a better chance of fighting off weeds and other growths that come around it.

Never dig too deep around the corn stalks, their roots are not the strongest either. If you damage the roots that could eventually spread to damage the entire stalk and your efforts would’ve been for nothing.

Watering is another must for growing anything, but knowing how much to water is another thing that really matters. Many farmers suggest about 1 inch of water per corn stalk per week. This will make sure it is not overwatered but watered just enough.

There are many types of bugs that are attracted to young corn plants and can often hurt them beyond repair. Cutworms, flea beetles, earworms, and more are things that could come and chew holes in the young corn stalks thus stunting their growth or killing them.

In order to fight off these bugs many suggest BT, vegetable oil, dish soap, and water to spray on the ends of each ear of corn every few days. This will kill of the bugs that may be there and push away other bugs that could be coming.

Why is Corn Good for Us?

Like stated above corn, in some forms, is a whole grain. We were all taught in elementary school that whole grains are a part of a balanced diet and should always be included. Whole grains contain lots of minerals, fiber, and vitamins that are needed for your body to function correctly.

Overall corn includes Vitamin A, Vitamin B-6, Zinc, Fiber, and Protein. Don’t take this seemingly simple food item for less than it is worth.

Bushels of corn are 56 pounds of vitamin and mineral rich foods that all living things need. This is the reason that so many pests and wild animals are attracted to corn plants which creates all the more reason to protect the corn as discussed above. From a bushel of corn many companies extract many different things, including ethanol, starch, sweetener, and oil. Whether you notice or not you use corn in your everyday life, even if you don’t eat it.